Over the past year THREE separate cases regarding gerrymandering in Norh Carolina have been making their way through the courts. RACIAL, PARTISAN and JUDICIAL.

On January 5th, Persily testified before a federal court as to his process in redrawing the racially gerrymandered maps.

In public and in court documents, several lawmakers have stated that they intend to appeal the special master appointment and his subsequent maps to the U.S. Supreme Court.

In 2016, a federal court ruled that the Republican-controlled North Carolina legislature had unconstitutionally gerrymandered two of the state’s thirteen congressional districts along racial lines in 2011. The federal court then ruled that the maps be redrawn. Efforts to redraw the 2011 maps led to the unconstitutional 2016 congressional district maps.

In addition to fighting gerrymandering in the courts, Common Cause has been a longtime advocate for legislation that would establish nonpartisan redistricting in North Carolina.

House Bill 200 would take redistricting power out of the hands of legislators and give it to an independent body, which in turn would draw districts free from partisan politics.  While the measure has broad support in the NC House with 39 bipartisan co-sponsors, it has not yet been given a hearing or a vote in that chamber.

Over 260 civic leaders from 130 towns and cities across North Carolina have signed a petition calling on the legislature to pass independent redistricting reform. And more than 100 North Carolina business owners have launched a coalition calling for an end to gerrymandering.

How are these proposed Judicial maps Racist?

The House has already approved the bill. In 2018, the Senate is now making moves to move forward with it. 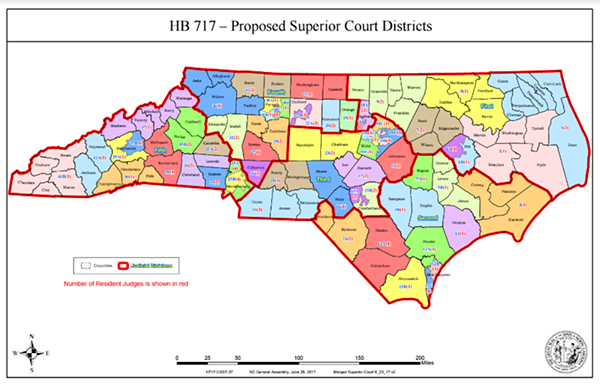 Most political representatives, from Congress to school boards to judges, are elected by voters who have been sorted into districts. Redrawing the boundary lines for these districts is called redistricting.

When does redistricting happen?

Every ten years. The U.S. Constitution mandates that a census is to be conducted every ten years in order to ensure voting districts remain roughly equal in population. The current national census was held in 2010; the next census is scheduled for 2020 and will be largely conducted using the Internet.

Who draws the districts?

Gerrymandering is drawing the voting district map boundaries in ways that establish a political advantage for a particular political party (Republicans or Democrats) or group. Sometimes gerrymandering results in irregular, nonsensical shaped voting districts designed to increase or decrease a specific type of voter like minorities or Republican voters.

Essentially, gerrymandering is rigging the voting system so politicians can choose their voter.

In addition to its use achieving desired electoral results for a particular party, gerrymandering may be used against minorities to dilute their voting power and diminish their voices.

Cracking: Diluting the power of the opposing party’s supporters across many districts